Water covers approximately 70 percent of Earth's surface and the human body contains up to 78 percent water, depending on body size. Yet, water seems to be taken for granted here on Earth. But if you travel to an orbital altitude of about 250 miles, water starts looking pretty interesting. Especially to astronaut Don Pettit on-board the International Space Station.

In recent Science Off the Sphere episodes, Don's already shown us the dance of water droplets around knitting needles and how centrifugal force affects antibubbles in microgravity. Now, he's pulling out the H2O again to show us how it interacts with sound waves. 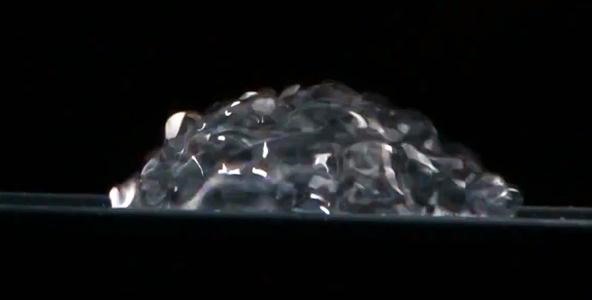 He then plays around with slower speeds and other frequencies up to 40 Hz. But the real show doesn't take place until he jams the ZZ Top. Though water does no behave this way to sound waves on Earth, it does remind me of watching cornstarch dance on speakers. Even the wildly sophisticated movements of ferrofluid reacting with magnets.

Do you know why Don uses low frequencies to get the water to jiggle? Let us know in the comments below! Or share you answer with Science Off the Sphere.

To answer the question: Low frequencies contain more energy and move the liquid easier. You could move the water with higher frequencies but it would take a lot more volume (wattage power). There is some technical graph somewhere of the falloff of sound energy in the spectrum. It's the same reason you only hear the bass outside a loud club. The higher frequencies are not strong enough to vibrate themselves through the wall materials.

cause not even space can mess with the pure power of Mr. Hill.

Here's a quote of the answer posted by Science Off the Sphere from a neighborhood science association in New York:

"We think it is because the lower frequency vibrations allow for the formation of standing waves. Standing waves are made when two waves traveling in opposite directions intercept allow them to have constructive and destructive interference. This is more likely to happen at lower frequencies."