When he's not taking orbital videos of Earth's auroras, NASA Astronaut Don Pettit is experimenting with water in zero gravity. He's already shown us how water droplets can orbit around knitting needles in a microgravity environment. Now he's playing with water again, this time—antibubbles.

Check out the video below for Pettit's demonstration on-board the International Space Station, where he creates bubbles inside of a thick, floating shell of water, i.e. bubbles within bubbles!

Just what is an antibubble?

An antibubble is actually a droplet of liquid surrounded by a thin film of gas. That's exactly the opposite of a gas bubble, which is the equivalent of you blowing air through a straw into a cup of water. Pettit actually creates a water bubble inside of a sphere of air! First, he creates a large spherical shell of moving water, aka a bubble. Then using a syringe, he injects a droplet of water inside of it, aka an antibubble, which eventually centers itself inside the rotating sphere. 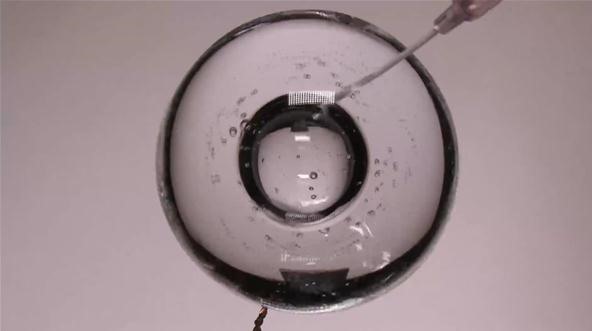 Pettit asked his viewers why the bubbles center themselves as the spherical water shell rotates. The answer? Here's a paraphrased explanation that Lidia Luque gave:

When gravity is taken out of the equation, another force acts on the bubbles called centrifugal force. Water is denser than air, so it is pushed to the outside of the bubble as it feels a greater centrifugal force (H20 also has strong intermolecular forces so it doesn't scatter) and air is accumulated in the middle (as the other space is taken by the water).