Just a couple Saturday's ago, we were blessed with the Supermoon, where the moon was at perigee with our planet, creating a larger than usual Moon for us here on Earth. Now, we've got another spectacular show in the skies coming up, only this one isn't at night. There will be an annular solar eclipse on Sunday, May 20th!

There are three different types of solar eclipses, which are partial, total, and annular. A partial solar eclipse just slightly dims the normal sunlight, while totality completely devours it, creating one of the most breathtaking sites in the skies ever. But an annular solar eclipse, which is what's coming up this weekend, is just as pleasing to the eye—and just as dangerous! 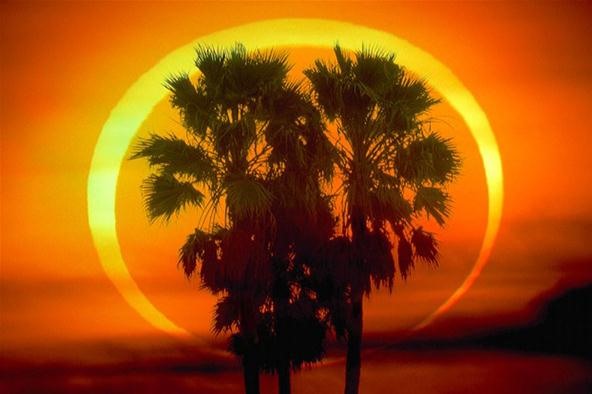 In an annular solar eclipse, the Moon is at or near apogee, the farthest distance from Earth. That's exactly the opposite of the Supermoon a few weekends ago. Apogee for this month actually occurs on Saturday, May 19th, so the Moon will be just a little closer, but still far enough away to create a bright annulus (ring) around it when passing in front of the Sun. This is also know as the red "ring of fire", which is quite the opposite of the "red ring of death" (which my Xbox recently suffered).

To view the annular solar eclipse, the best place to be is in the antumbra, the inner region here on Earth where the bright ring from the Sun around the Moon will be the most visible. 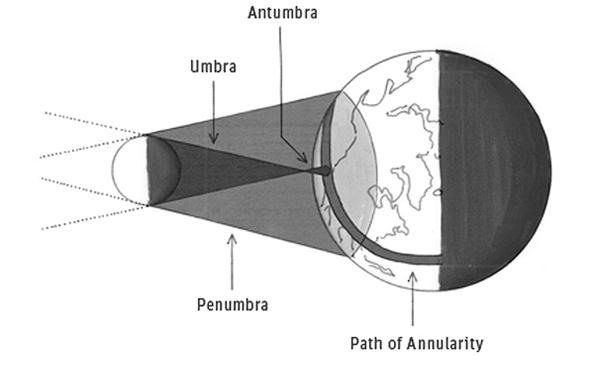 Some lucky North Americans will be able to view the annular solar eclipse, as outlined below. Anyone in the gray area will see the annulus. For a global map, click here. 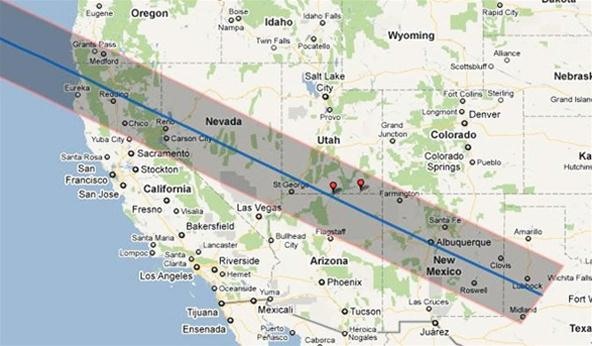 Unfortunately, only those in the actual antumbra path outlined above will be able to see the annular solar eclipse. Everyone else, including Los Angeles (where I'm at) will only see a partial solar eclipse, meaning no red ring of fire.

No matter if you're going to be seeing an annular or partial, it's still important NOT to look into the Sun directly. If you look at the Sun with your bare eyes, a permanent image of it can be burned onto the back of your eyes, destroying the rods and cones—even if it's not painful at the time. To successfully view the solar eclipse, you'll need one of the below choices.

These are just glasses made specifically for viewing solar eclipses, usually made of cardboard. The lenses are just solar filters that remove 99.99% of the Sun's visible light and 100% of the harmful UV rays. They're usually made of either Mylar or black polymer, the latter being the safest. They're pretty cheap, usually no more than five dollars, and there are many places to get these. Whatever they are, always make sure they have the "CE" label on them, i.e. "Certified Eclipse". 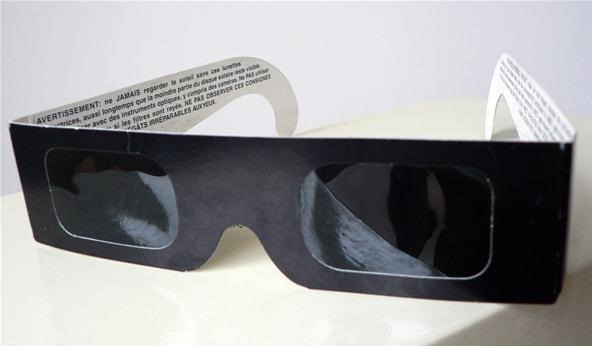 But if you're looking for them now, it's going to be tough. Most shops on Amazon are sold out and finding a local shop that sells them might be difficult. The best places to check for last minute glasses are observatories in your area. I know the Griffith Observatory in Los Angeles will be selling Solarama Viewing Filters and Eclipse Glasses in their gift shop. 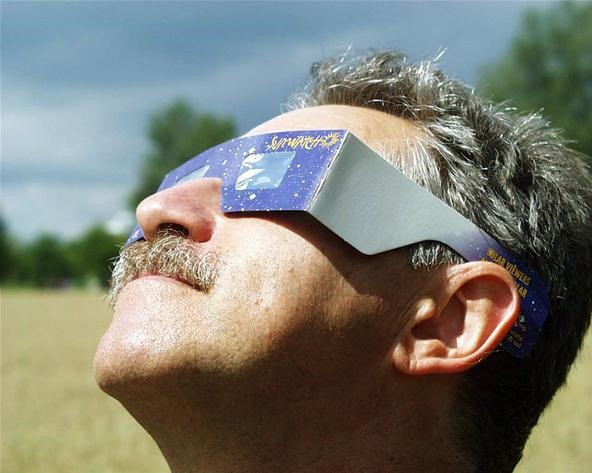 The same welding glasses that protect welders from eye damage during very hot arcs can protect your eyes during a solar eclipse. They range on a scale of #1 to #14, with #14 being the darkest shade of glass. If you're going to use welder glasses, only get the #14 ones. Anything less and you could still damage your eyes. Stacking two lower grades of glass will not provide adequate protection against the Sun. 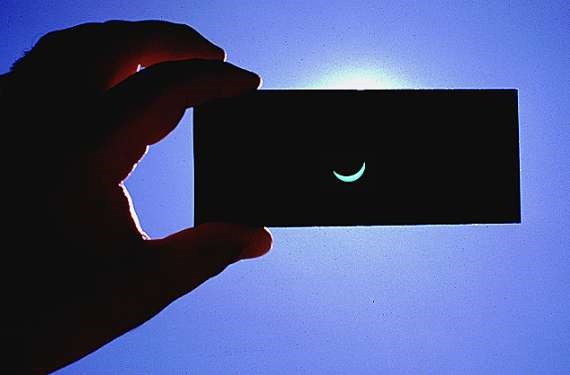 However, you might be able to use a lower shade if you're making these for your camera. If you want to make some DIY welder glass filters for your camera, just head on over to DIY Photography for the tutorial. 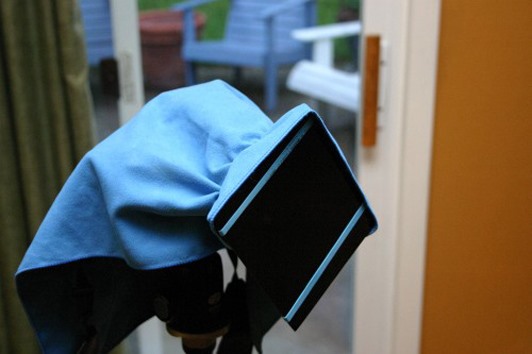 The safest way to view a solar eclipse is using a homemade pinhole projector. Why is it the safest? Because you're not viewing the Sun directly at all, but just a projection of it. This is a pretty good how-to on building a pinhole projector with cardboard, aluminum foil, a pin, and white paper. And here is another one on using the same concept, but with a cereal box instead of a normal box. But that basic principle can be explained in a little diagram: 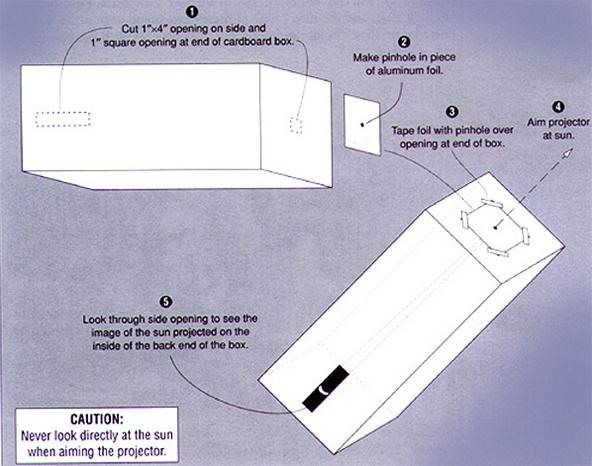 If you can't figure out what to do with the box after that, I think this should clear things up: 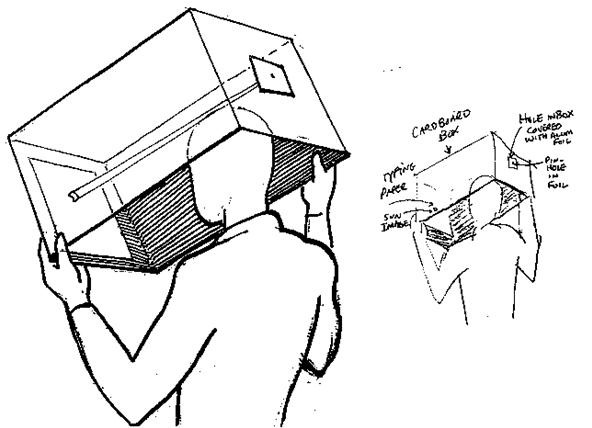 Instructions or the above box can be found here.

If you're looking to take photos of the solar eclipse or get a closeup through a telescope, your best best is to by a legitimate solar filter. These can be super expensive, but they are definitely the best way to protect your equipment (and eyes) from the Sun. 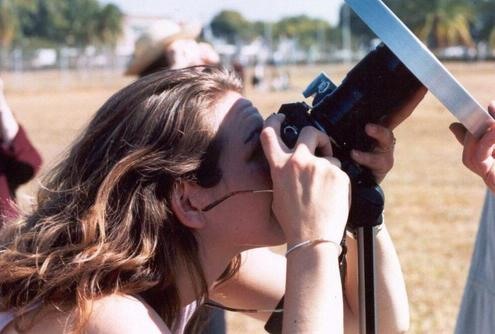 If you can't afford a professional solar filter for your camera, if you can get your hands on some Baader AstroSolar Film (or some eclipse-approved black polymer film) and a couple ND filters, you can make your own at home. Frank Hollis posted a wonderful tutorial for making DIY solar filters for your camera. Make sure to check out the full tutorial here. 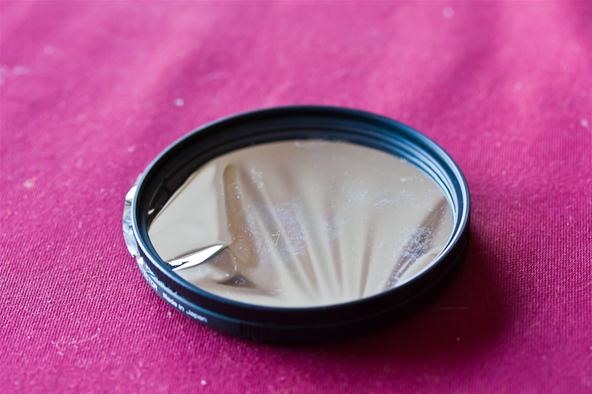 And that's about it. Do any of you have advice for viewing or capturing the upcoming annular solar eclipse safely? I now Cory Poole is going to be using his new solar telescope, but that's a pricey investment for those just wanting a one-time look.

Let us know your professional solar-eclipse-watching thoughts in the comments!

My sister just told me a couple days ago how she wishes she could see a solar eclipse, will have to show this to her...Would have to drive about 5hrs to St. George, UT to see it, but a partial eclipse is pretty cool too!

If you go to http://shadowandsubstance.com/ you can see animations for various states of the eclipse, whether it's partial or annular.

Whoa, that's a nice animation. It's nice to know exactly what to expect. Thanks for posting.

I suggest anyone looking to view the actual annulus that lives nearby should drive to see it. The next non-partial solar eclipse to hit the states will be in a total eclipse in August 2017, but the path is very similar to this one, only stretching all of the way across the continent from Oregon to South Carolina. The next annular eclipse to grace the states will be in October 2023, starting in the south Oregon area and making its way down to Texas.

I'm already telling my bosses that I'm going to take a couple of days off in August 2017. :)

Wow! Thanks! My daughter didn't really get to see this one, so I told her I'd take her so she could really see it when the next one comes.

Just posted up my final preparation pictures using my solar telescope on the corkboard here: https://astronomy.wonderhowto.com/corkboard/solar-scope-dialed-for-eclipse-0135195/
I'm pretty happy with the results.

Going to see it tomorrow with my friends, can't wait! I don't have any glasses, maybe I will make that box or borrow my Dad's welding shield? haha

I looked for welder lenses, but could only find shade 12 and under. I eventually found some eclipse glasses at a local camera/telescope store for a buck each! I might make a box, too... just to do it ;)

Yeah, my welder lense is shade 11, will that be sufficient? I know you should preferrably have a 14, but I guess that should be ok as long as I don't stare indefinitely?

I'm not sure. I think it should be at least #12 though, which I hear is uncomfortable, so 11 might not offer good enough protection. Then again, I hear people using #10s for quick viewing just fine. But I'm no optometrist. Just steal glances and I'm sure you'll live!