So, I got this email today from Groupon claiming today is Earth's 400 birthday. Groupon is known for their humor, but how (and why) did they pick today as Earth's 400th birthday? 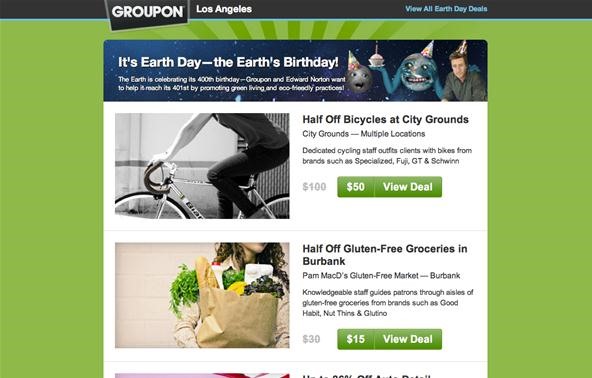 "Earth Day" is actually celebrated on April 22nd, and the first official "Earth Day" was just celebrated in 1970, a mere 42 years ago. Scientists believe Earth is around 4.54 billion years old. Religious folks believe Earth was created by God about 6,000 years ago. And as far as I know, the only notable even in April of 1612 was the execution of Edward Wightman, the last man to be burned alive for heresy.

So, where did Groupon come up with this number? In a recent tweet, they said, "We got our facts from NASA, Apollo 16 sang "How Old Are You Now" and Earth responded with 360".

I was not aware of any singing aboard Apollo 16. But if they were, why would Earth respond with 360. Because the Earth is round, i.e. 360 degrees?

Wikipedia has even latched onto Groupon's humorous claim that Earth is 400 years old, noting it as the only event on April 18th in the 1612 page. I'd say Groupon did well today.