What happens when you combine a passion for astronomy and a love of wine? Cabernet that's out of this world. Literally. It's called Meteorito, and has a berry, nutty flavor with just a hint of iron and nickel. The wine was made by oenophile and amateur astronomer Ian Hutcheon, who runs his own vineyard and established an observatory in Chile called Centro Astronomica Tagua Tagua.

Meteorito is a Cabernet Sauvignon infused with the 4.5-billion-year-old meteorite measuring three-inches long, believed to have crashed about 6,000 years ago in the Atacama Desert in Northern Chile where it was found. The small space rock was submerged with 25-day fermented Cabernet grapes in a wooden barrel for 12 whole months. After that year, it was blended with another batch of Cabernet to make about 10,000 liters, to be sold at just over 11 bucks. 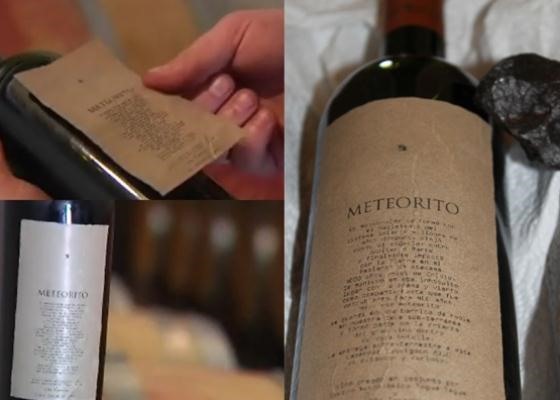 Hutcheon said, "The idea behind the project was to blend my passion for both astronomy and enology in a real, physical way rather than just a symbolic one, and give everybody the chance to touch an element of space and taste particles of the birth of the solar system via a very good handcrafted wine."

Hopefully the taste is a little light on the metallic side, because I'm sure the rusty flavor might space you out. A wonder how it'll effect Cabernet Sauvignon's normal tannic taste? Surprisingly, I'd say a lot, since his grapes were planted on top of an old gold mine. Though I can't see how a single small meteorite could effect 10,000 liters.

Gimmick? Definitely. But a very cool one at that.