Note: This shower is only visible in the Northern Hemisphere.

The Quadrantid meteor shower is one of my personal favorites, mainly because of the amount of meteors it produces.  You can sight more than 100 meteors per hour- that's more than 1 meter per minute.  Even though that doesn't sound like much, it will make your observing experience much more exciting. The peak is short, typically lasting no more than an hour or so.  It is more easily observed on the fourth, with its peak at 1:00 AM EST.

The thing about the Quadrantid shower is that it is rarely observed because of the weather.  Since it's January, it's obviously cloudy.  Even if there weren't clouds, the cold generally keeps observers inside (even though cold air is better for observing). In 2008, NASA scientists flew in an airplane over the Arctic Circle and found many Quadrantid meteors.  This is a photo they took: 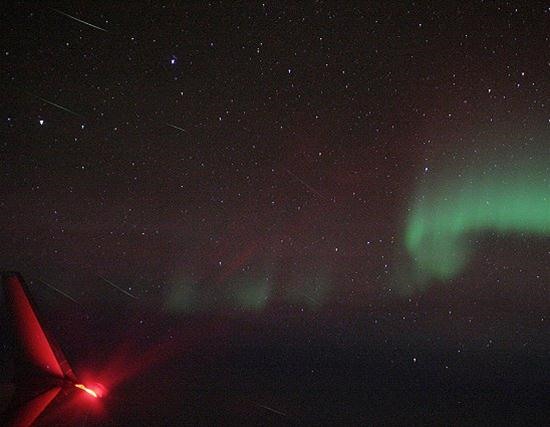 The red light to the left is the light on the wing of the airplane.

As I said in my article on how to observe the Geminid Meteor Shower, this is one of the two known showers to be caused by an asteroid.  Quadrantid gets its name from Quadrans Muralis, a now obsolete constellation which became part of Boötes.  Adolphe Quetelet, who worked at the Brussels Observatory, discovered the shower in the mid 1830s.  Shortly after it was noted by several other astronomers in Europe and America. 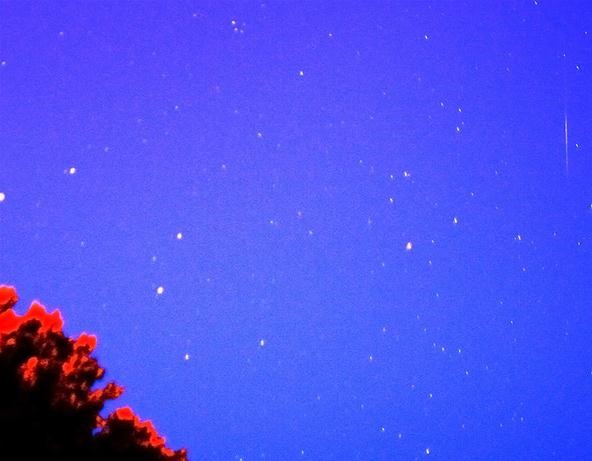 It was found that the shower originated from 2003 EH1, a dwarf planet (which is bordering on an asteroid) discovered by the Lowell Observatory Near-Earth-Object Search (LONEOS) on March 8, 2003, currently passing 0.213 AU outside of Earth orbit in a comet-like orbit.  The orbit agrees with that of the Quadrantids.

Now, how to observe it.

All of these tools are optional except for the binoculars, but the more of these you have the more relaxing your observing session will be.  All you really need is your eyes, but here are a few tools to make the experience more exciting.

If you have all of these, your setup could look similar to this one: 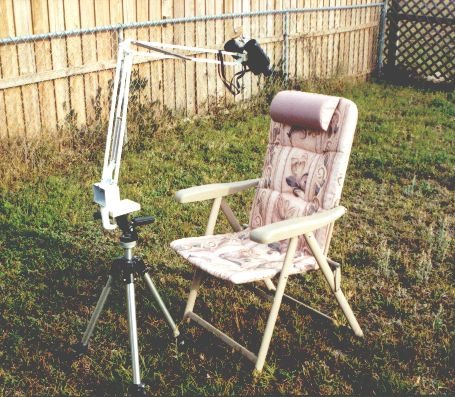 Step 2 Picking a Location to Observe

This is probably the hardest step, because you have to actually find a place to observe. You want a place that is pretty far away from any big cities and about a mile from any tall buildings where there would be lots of light pollution.  You want to avoid being close to any streets because the bright lights of the cars will mess with your pupil size, causing you to not be able to see dim objects like the meteors.

The meteors should radiate from around the North star and the Big Dipper, right inside the Boötes constellation.  This shows where they radiate from: 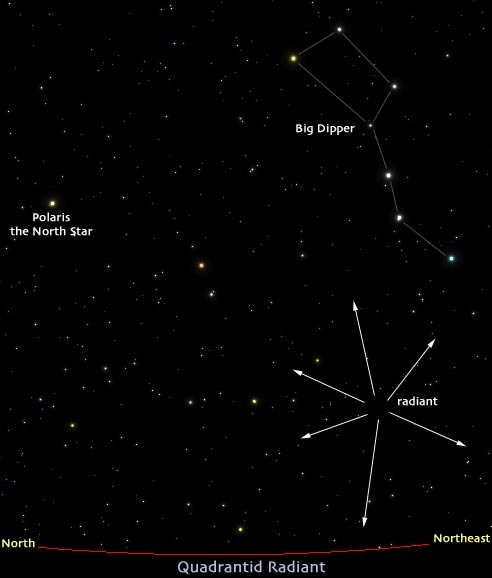 This diagram shows the time on January fourth, at 1:00 AM EST.  Set up your chair and your binoculars, and observe!  Take pictures or videos and post them to the community corkboard.

interesting to read the background info, thanks.

What a cool article!!! thankyou so much for your very interesting piece.